With cracks within the fold of the Ondo State Chapter of the All Progressives Congress, APC, posing imminent danger for the party’s chances in the 2020 governorship election in the state, National Leader of the party, Asiwaju Bola Tinubu has urged the various aggrieved and warring groups to sheath their swords.

The former Lagos State Governor made the plea on Tuesday’s evening in Akure, the Ondo State capital, after a peace meeting which was brokered by the APC leadership in the South-West.

Tinubu, who was accompanied to the state by the former Osun State Governor, Bisi Akande who was also the former APC interim National Chairman, stressed that political crisis is not strange to party politics but it must be resolve in the overall interest of the party and the benefits of all members.

While emphasising that the 2020 governorship election is crucial for the party’s victory, he enjoined the aggrieved leaders and members to close ranks and work towards the common goal of winning the election for the party.

Tinubu, who spoke at the Dome, Alagbaka, Akure, shortly after a closed door meeting with APC stalwarts in Ijapo area of the state capital, said that, “We are leaving one thing behind. The charity that must begin at home. 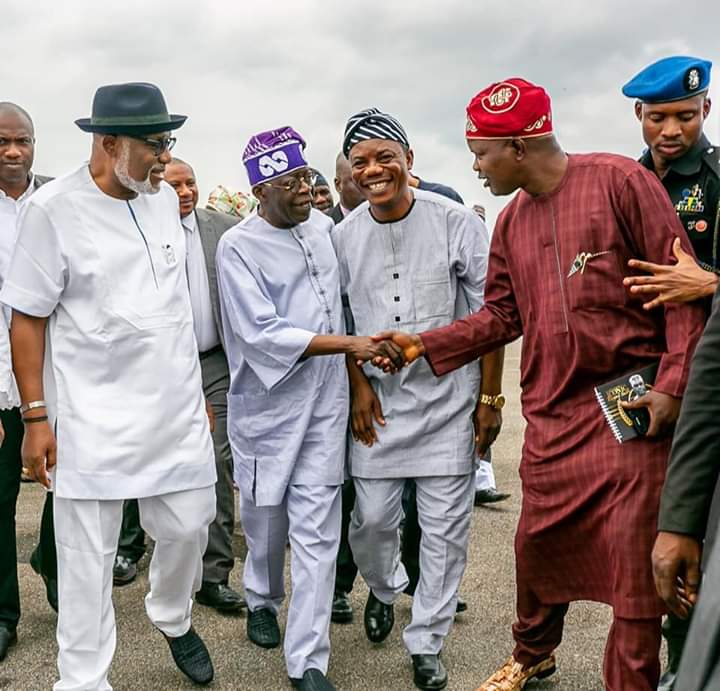 “We want to win the next election in Ondo State and every other elections. The solution is in your hands. We want to thank you for your commitment to the party.

“We apply conflict resolution mechanism which is part of politics to resolve any other problem and smoothen the edges.

“The next move is unity; talking together, consulting one another and working together for the interests of our party and in particular Ondo state.”

Also on the entourage of Tinubu, who was received at the Akure Airport by Governor Oluwarotimi Akeredolu and his Ekiti State counterpart, Kayode Fayemi, were the former governors of Ogun and Ekiti states, Segun Osoba and Niyi Adebayo, alongside other chieftains of the party in the South-West. 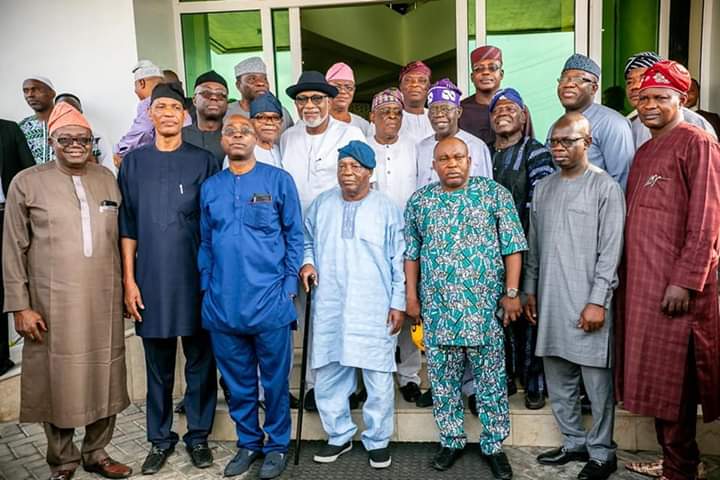 Speaking with newsmen on what was discussed at the meeting, Chief Bisi Akande, former governor of Osun state, said the APC leaders had resolved to mend the broken fences in APC in Ondo state and they have been instructed to work together.

“We talked how we shall win next election resoundingly. You see all our leaders coming out together laughing and happy. We have our leaders in Ondo and we have told them to go and do their job and bring our party together as one.

“We shall also keep encouraging our leaders in Ondo state to do what we have agreed to which is unity at all level,” Akande said.

The former Chairman of the party in the state, Hon. Isaacs Kekemeke, expressed satisfaction, saying all aggrieved members have agreed to sit down and find solution to the party’s problem in the state.

“So in a short while we will be putting ourselves together and proffer domestic solution to our domestic problem as motivated and encouraged by our National leader.

“We have all agreed that we have offended ourselves and that the better thing to do is to forgive ourselves and make comprise the way forward and thee most important thing is to build a platform and move the party forward.”

On his part, Chief Olusola Oke said the “leadership of the party in the South-West met with us to foster peace and unity and we have resolved on some fundamentals.

“We will meet again to pursue the fundamentals and when we finally resolve, we will brief them.”

DAILY POST recalls that the Ondo State APC have been enmeshed in series of crisis which started immediately after the party’s governorship primary which saw to the emergence of various factions of the party after some of the aspirants faulted the outcome of the primary.

Also the last general elections further polarized the already divided ranks within the party after accusations of imposition of candidates by the national leadership of the party and counter-accusations of alleged anti-party activities of the governor and the state exco of the party.

Bayelsa: APC under ‘fire’ over attack on Supreme Court

Bayelsa: APC under ‘fire’ over attack on Supreme Court